Violinist Jacqui Carrasco has performed as a soloist and chamber musician throughout the United States, Canada, Europe, Japan, Mexico and Russia, and in styles as diverse as Argentine tango, jazz, and avant-garde new music.

Her career as a tango violinist began as a member of the New York Buenos Aires Connection in the 1990s and included concerts with famed bandoneónist Nestor Marconi accompanied by the Philadelphia Orchestra; live and PBS-recorded performances with Marconi and cellist Yo-Yo Ma to celebrate the music of Astor Piazzolla; and regular appearances at Lincoln Center’s Midsummer Night Swing series. More recent tango performances have included guest appearances with the Buenos Aires-based Brenda Angiel Aerial Dance Company at the Durham Performing Arts Center, as well as her ongoing concertizing and recording as violinist of the North Carolina-based Lorena Guillén Tango Ensemble.

Ms. Carrasco has premiered pieces in major venues like Lincoln Center’s Alice Tully Hall and the Library of Congress, but she feels equally at home sharing music in alternative spaces like clubs and galleries, especially in her current work as the violinist of the contemporary music group Blue Mountain/Forecast. Her many recordings include contemporary chamber music on the Nonesuch, Koch, Albany, Mode, CRI, Braxton House, and Navona record labels, and in the commercial realm, she has performed for numerous advertisers and media, including recent violin tracks for the Apple+ show “Dear…” and the 2020 movie Street Survivors: The True Story of the Lynyrd Skynyrd Plane Crash Rescue.

In North Carolina, Ms. Carrasco has been featured in solo and chamber music performances at Duke University; the UNC campuses in Chapel Hill, Greensboro, and Wilmington and the UNCSA campus in Winston-Salem; Chamber Music at St. Peter’s and the Bechtler’s Music and Museum Series in Charlotte; the North Carolina Museum of Art’s “Sights and Sounds” series in Raleigh; the American Dance Festival in Durham; and with the Mallarmé Chamber Players, the Tallis Chamber Orchestra and the Salisbury Symphony. From 2008-2017, she was the co-director of the Music Carolina SummerFest in Winston-Salem, performing and organizing concerts of classical chamber music and jazz.

Since 1999, she has taught as a Professor of Music at Wake Forest University, where she is also Associate Chair of the Music Department. 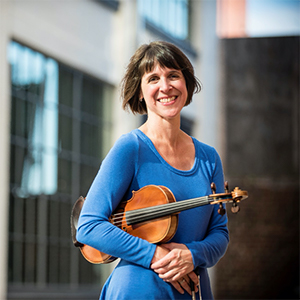